Vascular malformations are vascular disorders that occur when your veins, lymph vessels or arteries aren’t formed properly — either tangled or irregularly widened.

Vascular malformations can develop anywhere in the body (including the arms, legs, chest, abdomen and pelvis), are typically present from birth and can become disfiguring or even life-threatening depending on the location.

There are three types of vascular malformations:

Because malformations can grow larger over time — typically as a result of hormone changes from puberty, pregnancy or menopause — they often require lifelong monitoring and care.

Our Approach to Treating Vascular Malformations

Experts in our Vascular Malformation Clinic are dedicated to providing the long-term, specialized care needed to manage all types of vascular malformations, including AVMs.

Our imaging specialists use world-class dynamic magnetic resonance venography, or MRV, and image fusion to develop a specific picture of your vascular malformation. Vascular specialists then leverage this advanced imaging and a team-based approach to provide you with the most effective treatment plan for your specific condition and unique lifestyle needs.

If you have a vascular malformation, our team of experts are here for you for life.

What Is a Venous Malformation?

A venous malformation occurs when your veins are abnormally widened or tangled together. This can either occur at the surface of your skin or deep underneath your skin.

If a venous malformation grows and causes your skin to stretch, a painful skin lesion can form. In addition, widening of the vein may cause blood to pool and result in painful blood clots.

When a malformation grows very large or causes symptoms, including pain or bleeding, treatment is often recommended.

What Is an Arteriovenous Malformation (AVM)?

An AVM is a mass of knotted, abnormally formed arteries and veins. These malformations can cause increased blood flow in your veins, creating intense pressure.

Some AVMs never cause problems. However, if AVM symptoms do develop, they can include:


Other symptoms may include coughing up blood, shortness of breath on exertion, deformity, brain abscess, stroke or infection.

Generally, AVMs can’t be cured — but they can be controlled.

What Is a Lymphatic Malformation?

Lymphatic malformations occur when lymph vessels aren’t formed properly and are defective at transporting lymph, a clear fluid that travels through your body to help prevent infection. As a result, lymph collects into cysts of varying sizes.

Lymphatic malformations can make it more likely for someone to experience infections, including upper respiratory infections and ear infections. Depending on the size and location, cysts caused by these malformations may also impair swallowing or breathing.

How Are Vascular Malformations Diagnosed?

How a vascular malformation is diagnosed depends on the symptoms, which in turn depend on the location of the malformation.

If your doctor suspects you have a vascular malformation, he or she will ask you questions about your medical history and perform a physical exam. A physical exam can provide your doctor with information about the type and extent of your malformation — especially for those found in extremities. You may also be asked about additional medical conditions that may be associated with the disease.

Deeper malformations, and those on the torso, are much more difficult to diagnose.

Some form of noninvasive imaging, such as a cardiac CT or cardiac MRI, is required to determine the type and extent of the malformation, as well as whether it:

How Are Vascular Malformations Treated?

If the malformation is small and causing only minor symptoms, your vascular specialist may take a watchful waiting approach, monitoring for changes in size and to see whether symptoms worsen or change over time.

In some cases, nonsurgical treatments can be used to shrink a vascular malformation or reduce the associated swelling and/or pain.

For instance, venous malformations can often be treated using compression stockings — which compress the skin to reduce swelling and pain. They may also potentially reduce the risk of blood clot formation.

AVMs can be treated in multiple ways, all of which are tailored to the particular AVM and may include embolotherapy or sclerotherapy.

Sclerotherapy uses an injectable solution to cause the abnormal blood vessel(s) to collapse and scar. The procedure forces blood to detour through healthier veins, reducing pressure in the AVM.

Specialists might have to perform each of these procedures on multiple occasions, separated by months, to control recurring AVMs.

Following either of these procedures, you can expect to stay at least one night in the hospital, with minimal discomfort for one to three days.

If the vascular malformation is small enough and located in an accessible area, your vascular surgeon may recommend surgery.

Surgery is typically reserved for small venous malformations located in a person’s limbs, but may also be used to prevent a malformation from affecting nearby organs or nerves. 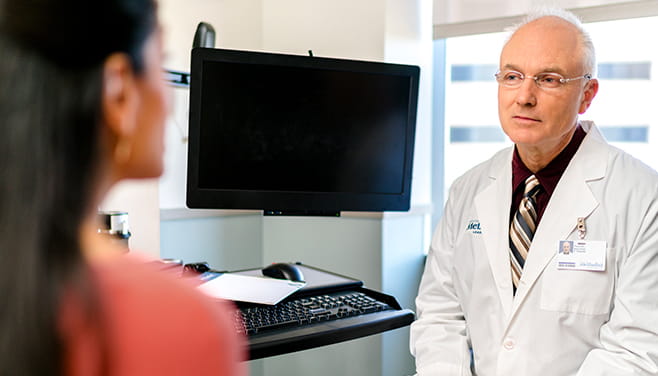 The Vascular Malformation Clinic highlights our expertise in both the diagnosis and treatment of vascular malformations, including AVMs. In keeping with our commitment to leading medicine, the clinic delivers long-term, multiprocedure, multispecialty, comprehensive therapy for treatment of AVMs.  Learn more >