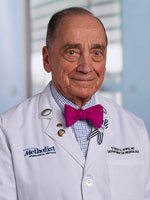 
Dr. Appel is former chair of the Stanley H. Appel Department of Neurology, Professor of Neurology at Weill Cornell Medical College, and the Peggy and Gary Edwards Distinguished Chair for the Treatment and Research of ALS at the Houston Methodist Research Institute. He was previously Chair of the Department of Neurology at Baylor College of Medicine as well as Chief of the Neurology division and the James B. Duke Professor of Medicine at Duke University Medical Center, North Carolina.

Dr. Appel is a native of Massachusetts and received his Bachelor Degree at Harvard University and his Medical Degree from Columbia College of Physicians and Surgeons. He is Director of the MDA/ALSA ALS Research and Clinical Center at Houston Methodist Neurological Institute, and past Director of a National Institute of Aging Alzheimer’s Disease Research Center.

Dr. Appel is a member of numerous professional societies and committees, and is the author of 15 published books and over 350 articles on topics such as ALS, neuromuscular disease, Alzheimer’s Disease, and Parkinson’s Disease. He has received a number of awards for his accomplishments in Neurology and Biochemistry, including the Gold Medal Award in 1997 from Columbia College of Physicians and Surgeons for “Distinguished Achievements in Medicine”, the Sheila Essey Award in 2003 from the American Academy of Neurology for “outstanding research in Amyotrophic Lateral Sclerosis”, Elected Fellow of the American Association for the Advancement of Science in recognition of the “dedication and commitment to advancing science and serving society” in 2003, Baylor College of Medicine Alumni Association Distinguished Faculty Award in 2004, MDA’s Wings Over Wall Street Diamond Award in 2004, Texas Neurological Society Lifetime Achievement Award in 2005 and the Forbes Norris Award for “compassion and love for humanity in research and treatment in patients with ALS” from the International Alliance of ALS/MND Associations in 2005, and the Museum District Business Alliance Award in recognition of his commitment to research, patient care, and education, 2007, and the recipient of the Houston Academy of Medicine 2008 John P. McGovern Compleat Physician Award. He is also named 2008 Best of the Best Physicians by the Medical Journal Houston.


Research in Dr. Appel’s laboratory focuses on developing new insights into neurodegenerative diseases, with a primary emphasis on amyotrophic lateral sclerosis (ALS).  The major goal is to develop therapeutics that suppress neuroinflammation and the immune/inflammatory alterations that drive neurodegenerative disease progression. In the mSOD1 mouse model of ALS, activated microglia, and T-cell lymphocytes drive disease progression. In vitro studies documented that motor neuron cytotoxicity is produced by pro-inflammatory M1 microglia, and neuroprotection is mediated by anti-inflammatory M2 microglia. The motor neuron injury that initiates the process can be reproduced in vitro with misfolded proteins (mSOD, TDP-43, and FUS) which activate microglia and promote an M1 phenotype that kills motor neurons. Neuroprotective cytokines IL-4 and IL10 released from M2 microglia/macrophages enhance motor neuron survival. In vitro Tregs not only suppress proliferation of Th1, but also suppress pro-inflammatory M1 microglia. These studies suggest that during early stages of disease, motor neurons are capable of intracellular repair abetted by surrounding glia enhanced and modulated by Tregs. However, with increasing injury within the motor neuron, misfolded proteins or their surrogates are released as danger signals and promote the pro-inflammatory M1 phenotype, diminishing protective Tregs and enhancing pro-inflammatory Th1 and Th17.