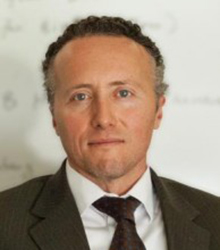 
Dr. Cristini is a leading expert and researcher in the fields of mathematical and computational biology, applied and computational mathematics, physical oncology, complex fluids and microfluidics, multidisciplinary (bio)materials science, and systems biology and medicine.

He was included in the 2014 ISI Highly-Cited Researchers in Mathematics, a total of less than one hundred mathematicians worldwide named “most influential scientific minds.” He served as editor for Cancer Research and several biomedical journals including NeuroImage and PloS Computational Biology. He has published two book monographs with Cambridge University Press in 2010 and with CRC Press in 2017, and over 90 peer-reviewed journal articles.

Dr. Cristini was the first recipient of the “Andreas Acrivos Dissertation Award in Fluid Dynamics” by the American Physical Society in 2000. His 2005 paper in the Bulletin of Mathematical Biology was in the top 0.1% of citations in the field of Mathematics and has been designated as a “New Hot Paper in the field of Mathematics” by the Institute for Scientific Information (ISI) Web of Knowledge; two articles have been featured in the Cancer Research Highlights of the American Association for Cancer Research. His research has been highly recognized internationally and by the media and several science museums in the US, and has been supported by the Cullen Trust for Health Care, the National Science Foundation, the National Institutes of Health, the Department of Defense, the States of California, Texas and New Mexico among the others.

For more than 15 years, Dr. Cristini has continually served in PI roles on several NSF, NIH, and DoD grants focused on the development of predictive multi-scale patient-specific computational models of tumor growth and mechanistic mathematical models of tumor response to chemo/immunotherapy, targeted therapy, and nano-therapeutics, most notably as part of multinstitutional grants including two NSF and joint NSF/NIGMS grants (funded in September 2017 and 2013, respectively), two R01s beginning in April and July 2018, two U01 NCI grants on pancreatic and gynecological cancers (funded in August 2015 and July 2017, respectively), two NCI Physical Sciences in Oncology Centers (PS-OC), one NCI Center for Excellence in Cancer Nanotechnology (CCNE), of which he served as the overall PI in 2015-2016, one NCI Integrative Cancer Biology Program (ICBP) center grant, and one NIGMS P50 grant in systems biology.