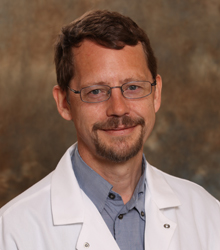 
Martyn A. Sharpe is a classically trained biochemist and bioenergeticist with a strong background in chemistry and the reactions of both reactive oxygen and nitrogen species. He has had more than a decade’s worth of experience in examining the cell proliferation/death mechanisms, and has examined the growth and characteristics of many different cell types including astrocytes, neurons and neuronal/astrocyte co-cultures.

Dr. Sharpe enjoys a large number of collaborations/friendships with scientists worldwide and has published papers with 85 co-authors over the last 15 years. He is often asked to participate in projects where there is an overlap of chemistry/cell physiology; especially in the areas of reactive oxygen/nitrogen species.

Dr. Sharpe switched from classical biochemistry/bioenergetics into related pathologies, especially of the brain, a decade ago following the death of his uncle from glioblastoma multiforme, soon after diagnosis. He has used the knowledge he acquired to develop drugs and drug delivery systems to target gliomas.
In addition to nanosyringes Sharpe & Baskin have been developing prodrugs to target gliomas that are based on their maturation by monoamine oxidase B (MAOB).

Martyn is deeply committed to neuro-oncology and is determined to develop a therapy to treat the 220,000 people, worldwide, who develop gliomas each year.


Dr Sharpe main areas of research have been the following:
-Design, synthesis and testing in vitro and in vivo MAOB activated pro-drugs and retention dyes for the treatment of glioma.
-Development of targeted nanosyringes for chemotherapy
-Examination of the sensitivity of human brain cells, astrocytes and neuron’s, toward organomercury
-Development of assays for identifying specific lesions in DNA