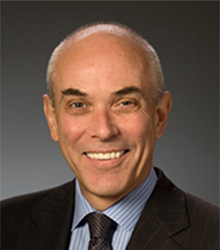 
Dr. Sostman received his M.D. degree in 1976 from Yale University School of Medicine. He then trained in internal medicine, radiology and nuclear medicine at Yale - New Haven Hospital. He was a faculty member at Yale University from 1981 until 1987, and then at Duke University, where he was Professor and Vice Chair of Radiology until 1995. In 1995 he was appointed Professor, Chair, and Radiologist-in-Chief at the New York Hospital-Cornell Medical Center. He remained at Weill Cornell and New York - Presbyterian for the next decade, serving as Senior Associate Dean for Clinical Affairs (2001-2005), Executive Vice Dean (2003-2005), President of the New York - Presbyterian Hospital Medical Board (2004-2005), and Trustee of New York - Presbyterian Hospital (2003-2005). In 2005, he became Chief Medical Officer, Chief Academic Officer and Executive Vice President at Houston Methodist. He served as Interim CEO of the Research Institute in 2010 and holds the rank of Distinguished Member in HMRI. Dr. Sostman was appointed President of the Houston Methodist Academic Institute in 2019 and is now Professor Emeritus of Radiology at Weill Cornell.

Dr. Sostman specialized in thoracic and cardiovascular imaging and was an active clinician for over 20 years. He was named to regional and national lists of the best doctors. In his roles as an administrator, he supervised a large clinical department, then led the entire clinical enterprise at Weill Cornell, and finally led the physicians of the Houston Methodist System. He conceived Weill Cornell's clinical strategic plan and served on the campaign committees that raised $750 million and guided recruitment of more than 50 new faculty, development of new clinical services and a new outpatient care building, which was the first new Cornell University building in New York City in 50 years. He currently serves on the Methodist Campaign Steering Committee.

He is a Founding Member of the Society for Cardiovascular Magnetic Resonance and the Society of Thoracic Radiology, and was elected to the Fleischner Society (1984) and the International Society for Strategic Studies in Radiology (1998). He has received numerous awards and honors. His service on scientific advisory panels includes the RNM Study Section of the NIH, the DMG Special Emphasis Panel (Chair) of the NIH, and the NIH Commission (Academy of Radiology Research). He has served as a member of the New York State Board for Medicine, President of the Association of University Radiologists, and Councilor of the American College of Radiology.


Dr. Sostman has continually emphasized translational research in new technologies including radiolabeled cells, noninvasive angiography, in vivo MR spectroscopy and metabolic imaging. He has had a defining role in clinical research in venous thromboembolic disease, guiding and participating in most of the major national and international research in this area. He was principal investigator on several NIH and foundation grants focusing on translational imaging and technology development, and has authored or co-authored of over 200 original publications and has lectured extensively nationally and internationally.