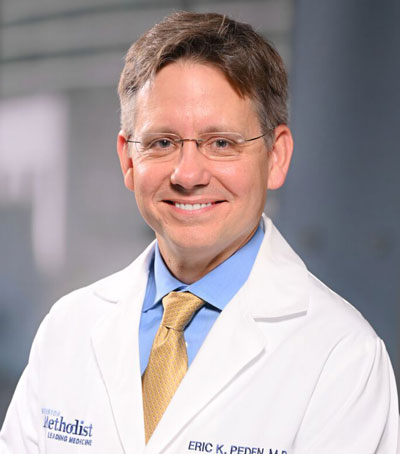 
Eric K. Peden, M.D., received his medical degree from the University of Texas Southwestern Medical School in Dallas, Texas in 1993. He completed his residency at the University of Texas Health Science Center at Houston and a subsequent vascular surgery fellowship in Vascular Surgery at the Rush-Presbyterian-St. Luke’s MedicalCenter in Chicago, Illinois. Dr. Peden also went on to do an additional Endovascular Fellowship at Texas Tech in Houston.


My research interests are quite broad within vascular surgery. I run our research affinity group in vascular surgery, focused on the industry sponsored trials which encompass trials for critical limb ischemia, venous disease, dialysis access, and arterial aneurysms.

Clinically, my practice is very heavy in dialysis access. I have leveraged this for a high volume clinical practice, excellent training opportunity for residents and fellows, and research productivity. I have been principal investigator in multiple industry trials and continue to publish on novel techniques and surgical outcomes. I have now worked on two animal models and run national meetings at my institution to train others in dialysis access. I am a frequent speaker at national and occasionally international meetings on dialysis access. Over the course of my career, I hope to influence dialysis access outcomes through my practice and research activities and involvement at the national/international level with societies, industry partners, and meetings.