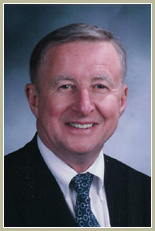 
Dr. Antonio M. Gotto is the Stephen and Suzanne Weiss Dean of Weill Cornell Medical College in New York, New York, where he is also Professor of Medicine. In addition, Dr. Gotto is Provost for Medical Affairs of Cornell University. He joined Houston Methodist Research Institute in 2011. Previously, at Baylor College of Medicine in Houston, Texas, he was the Bob and Vivian Smith Professor and Chairman of the Department of Medicine, Scientific Director of the DeBakey Heart Center, and the JS Abercrombie Chair for Atherosclerosis and Lipoprotein Research. He also served as Chief of the Internal Medicine Service at The Methodist Hospital in Houston. Dr. Gotto's postgraduate work included doctoral studies at Oxford University in England as a Rhodes Scholar, and residency training at the Massachusetts General Hospital in Boston, Massachusetts.

As a lifelong supporter of educational efforts aimed at cardiovascular risk reduction, Dr. Gotto has been National President of the American Heart Association and President of the International Atherosclerosis Society. He is a member of the Institute of Medicine and the American Academy of Arts and Sciences and a recipient of many honors, including the Gold Heart Award from the American Heart Association, the 2000 Distinguished Alumnus award from Vanderbilt University and the Vanderbilt University School of Medicine, honorary doctoral degrees from the University of Bologna and Abilene Christian University, honorary professorships from the University of Buenos Aires and Francisco Marroquin University (Guatemala), and the Order of the Lion from the Republic of Finland. Dr. Gotto was the 2004 recipient of the International Okamoto Award from the Japan Vascular Disease Research Foundation. In 2004 Dr. Gotto was also named Honorary Member of the Society for Progress in Internal Medicine (Ludwig Heilmeyer Society) in Germany. In 2010, he received the Maurice R. Greenberg Distinguished Service Award, the highest honor bestowed by New York-Presbyterian/Weill Cornell on members of the medical staff.


In the field of atherosclerosis, his basic science research interests include clinical disorders of lipid transport and the structure, metabolism, and function of lipoproteins and apolipoproteins. He and his associates were the first to achieve complete synthesis of a plasma apolipoprotein (apo C-I); they also determined the complete cDNA and amino acid sequence of apo B-100, one of the largest proteins ever sequenced and a key protein in atherosclerosis. In addition, Dr. Gotto has played a leading role in several landmark clinical trials demonstrating that cholesterol-lowering drug treatment can reduce the risk of heart disease.