Martyn Sharpe, PhD
Head of Research, Kenneth R. Peak Brain and Pituitary Tumor Treatment Center
Dr. Martyn Sharpe has been part of the Houston Methodist Kenneth R. Peak Brain & Pituitary Tumor Treatment and Research team for more than a decade and in April 2017 was appointed to the John S. “Steve” Dunn, Jr. Distinguished Professorship in Brain Tumor Research. He is a classically trained biochemist and bioenergeticist with a strong background in chemistry and the reactions of both reactive oxygen and nitrogen species. As a chemistry-based biochemist and pharmacologist, he investigates the role of reactive oxygen and nitrogen species in pathophysiology. His interest in mitochondrial oxidative/nitrositive stress led him to design and synthesize a range of small, superoxide dismutase, catalase and glutathione peroxidase mimetics. In addition he has designed a number of novel therapies for brain cancer and devoted his career to the development of drugs and drug delivery systems to target glioblastoma. Along with Dr. David Baskin, he is applying for intellectual property rights and patents for new families of chemotherapeutic compounds, the culmination of bench to bedside work at Houston Methodist. Clinical trials on these new treatments are pending. Dr. Sharpe came to the United States from his native Britain in 2004, originally focused on a career in classical biochemistry/bioenergetics/mitochondrial functionality of the brain. He has authored 65 peer-reviewed articles and has been the referee for several prestigious medical journals and grants, and is often called on as an expert reviewer for grants involving oxidative stress. Martyn is deeply committed to neuro-oncology and is determined to develop a therapy to treat the 220,000 people, worldwide, who develop gliomas each year.

Omkar Ijare, PhD is a trained bioanalytical chemist and has over 15 years of experience as a biomedical researcher. For his Ph.D. studies, he worked on the synthesis and structural elucidation (using NMR, MS, X-ray, and IR spectroscopy) of bioactive molecules containing indole and benzothiophene moieties. Previously, he has worked at the National Research Council Canada (Winnipeg), and was involved in the development of NMR based in vitro diagnostics methods for various cancers. At the Kenneth R. Peak Brain & Pituitary Treatment Center, he is studying the metabolism of brain tumors (pituitary, gliomas, meningiomas) and brain metastases through the analysis of surgically resected tumor tissues and blood specimens. He has performed a comprehensive metabolomic analysis of various immunohistochemical (IHC) subtypes of pituitary adenomas, and identified two metabolites (N-acetylaspartate and myo-inositol) that may evolve as potential biomarkers to distinguish various IHC subtypes of pituitary adenomas. Also, in the blood, Omkar Ijare has identified betahydroxybutyrate (BHB) as a potential biomarker for the detection of prolactin-secreting pituitary tumors.

In addition, he has been studying the metabolism of brain tumors using cell lines (generated from surgically resected meningioma and glioblastoma tumors) and 13C-labeled substrates/tracers (e.g. 13C-glucose, 13C-glutamine, 13C-betahydroxybutyrate), to identify specific metabolic pathways which can be targeted to develop novel drugs for the treatment of brain tumors.

Dr. Sudhir Raghavan is an Instructor in the Department of Neurosurgery and Institute of Academic Medicine and has been part of the Houston Methodist Kenneth R. Peak Brain & Pituitary Tumor Treatment and Research team since May 2017. Along with Dr. Sharpe, Dr. Raghavan has helped design a number of novel chemotherapeutic compounds for brain cancer and develop routes to synthesize these new therapies at high purity. He has an undergraduate degree in Pharmaceutical Sciences from India and a doctoral degree in Medicinal Chemistry from Duquesne University, Pittsburgh, PA. His doctoral and postdoctoral work extensively combined traditional synthetic organic and medicinal chemistry along with computational drug design 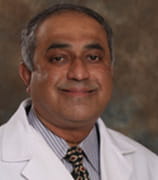 Santosh Helekar, MD, PhD
Director of Oncomagnetics Initiative Laboratory
Dr. Santosh Helekar is a HMRI Scientist and an Associate Professor at HMAI and Weill-Cornell Medical College. He joined the Houston Methodist Kenneth R. Peak Brain & Pituitary Treatment and Research Center in the Department of Neurosurgery as Director of a research program called Oncomagnetics Initiative in 2019. Prior to that he was in the Department of Neurology, where over the last 5 years he developed a new wearable multifocal transcranial magnetic stimulation device called transcranial rotating permanent magnet stimulator (TRPMS) in collaboration with Dr. Henning Voss of Weill-Cornell Medical College. The innovative features of the TRPMS brain stimulator is paving the way for a variety of novel research approaches and clinical applications involving in-home therapy. It has been tested successfully in a pilot clinical trial in chronic ischemic stroke. Houston Methodist has so far been granted three full utility patents for this device by the U.S. Patent Office. The portfolio of patents for neurological and psychiatric applications using the TRPMS device have already been licensed with several other patents pending related to oncomagnetic technologies developed in the laboratory.

Dr. Helekar has a medical degree from the University of Bombay and a Ph.D. in Neuroscience from Baylor College of Medicine. He was the recipient of the Minoru Suzuki Award for excellence in Neuroscience from Baylor College of Medicine in 1990 for his doctoral work in the cellular neurophysiology of an epileptic mouse model with a single gene mutation, which featured the first intracellular recordings and single electrode voltage-clamping in mouse hippocampal slices. He was also awarded the Louis and Emma Benzak Neuromuscular Disease Fellowship by the Muscular Dystrophy Association in 1993 for his postdoctoral research on the discovery of a new molecular mechanism for the maturation of neuronal nicotinic receptors. Throughout his scientific career he has continued to have a broad interest in neuroscience, having worked in wide ranging areas within this field from the molecular level to the behavioral and systems level. His systems level research involving functional magnetic resonance imaging in songbirds was featured on Public Broadcasting Service’s NOVA Science and National Public Radio’s Science Friday programs. His songbird studies were funded by the National Institute on Deafness and Other Communication Disorders, the National Institute of Mental Health, and the National Science Foundation. He has edited a book entitled “Animal Models of Speech and Language Disorders”, published by Springer.

Shashank Hambarde is trained in molecular biology of cellular response to genotoxic stress, and has more than 5 years of postdoctoral research experience in DNA damage and repair field. For his PhD he studied the mechanism of intrinsic radiation resistance in insect Sf9 cells at Institute of Nuclear Medicine and Allied Sciences, Delhi, India. In postdoc at Houston Methodist Research Institute, he investigated the role of human EXO5 exonuclease in DNA replication stress and ICL damage repair. His research yielded several publications in peer reviewed high impact journals. Hambarde joined Neurosurgery department because of his strong interest in translational research in the brain tumor field. He is working on elucidating the molecular mechanisms; including DNA repair pathways in OMF induced cell death in tumor cells.