At Kenneth R. Peak Brain & Pituitary Treatment Center research laboratories, Dr. David Baskin along with a team of specialized scientists are developing exciting new treatment strategies to fight brain tumors. At this center, doctors and scientists collaborate to bring together multidisciplinary research approaches, translating into clinical outcomes as novel treatments to improve patient quality of life – with the ultimate goal to kill cancer.

Some examples of these new treatment strategies include:

Over many years, Dr. Baskin and his team have developed a human primary brain and spinal cord tumor tissue/cell bank.

These include large collections of pituitary adenomas (well over 150 tumors), Glioblastomas (over 100), meningiomas (over 55) as well as anaplastic astrocytomas and other more rare tumors.

Each tumor is separated and stored in four different ways:


This unique and growing archive will allow researchers here and throughout the world to examine the nature of brain cancer at the genomic and cell physiological levels. It provides a large bank of tumor tissue to facilitate research leading to new therapies in the Peak Center laboratories and elsewhere via local, national and international collaborations. 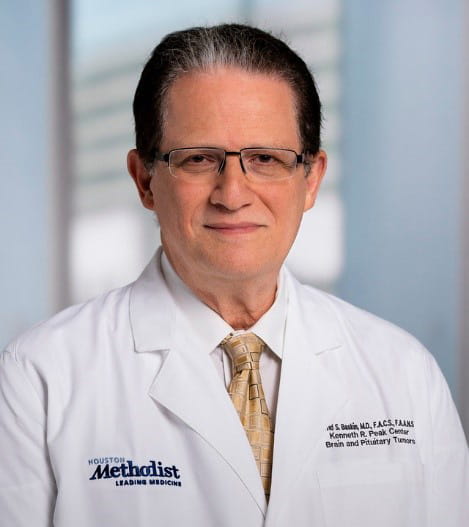 David S. Baskin, M.D., F.A.C.S, F.A.A.N.S. serves as the Director of the Kenneth R. Peak Brain & Pituitary Treatment Center, and oversees all of the work in the Peak Center Laboratories. He graduated with high honors from Swarthmore College with a B.A. from the Division of Natural Sciences and Engineering. He attended Mt. Sinai School of Medicine graduated first in his class, and received the James Felt Prize for Overall Academic Achievement. Dr. Baskin began his research career while still a resident at the University of California San Francisco (UCSF), where he won the prestigious Academy Award from the American Academy of Neurosurgery for the best research by a resident in Neurosurgery. After completing his residency, Dr. Baskin was appointed as Assistant Professor of Neurological Surgery and Assistant Professor of the Center for Biotechnology at Baylor College of Medicine, with a joint appointment as Chief of Neurological Surgery at the VA Hospital. In 1994 he was promoted to Professor at Baylor College of Medicine in the departments of Neurosurgery and Anesthesiology, positions he held until 2005 when his academic career transitioned to Houston Methodist Hospital.

Dr. Baskin has served as principal investigator on numerous research projects funded by private, state and federal sources, resulting in multiple patents and patent applications. He has raised over 14 million dollars for research from public and private donors and foundations.

He has also chaired or served on review panels and advisory councils for private, state and federal agencies. Dr. Baskin has published over 160 scientific manuscripts and book chapters and currently serves as Neurosurgery Residency Program Director in the Houston Methodist Neurological Institute, the Vice Chairman of the Department of Neurosurgery, as well as Professor of Neurosurgery at Weill Cornell Medical College, and Research Professor at the University of Houston in both the Cullen College of Engineering's Department of Electrical and Computer Engineering and the School of Pharmacy.

He has a busy clinical practice, and performs many complex surgeries in the brain and spine to remove and treat pituitary tumors. He is a master pituitary surgeon, with a national and international practice. He has performed more transsphenoidal operations for removal of pituitary tumors than any other neurosurgeon in the country.

He currently runs four separate clinical trials for treatment of malignant brain tumors, two using viral gene therapy, one using pulsed electrical fields with a device called Optune, and one using newly developed oscillating magnetic fields developed in the Oncomagnetics laboratory at the Peak Center. A fifth gene therapy trial conducted by Dr. Baskin has completed and will reopen using a new treatment regimen, and a sixth trial using a new tissue sealant will start in the third quarter of 2020. Two additional trials using Optune, a form of alternating electrical fields are underway. In addition a trial for treatment of COVID-19 is in the planning stages and will hopefully emerge shortly after additional laboratory research is completed.

Dr. Baskin is a member of many neurosurgical societies including the selective Society of Neurological Surgeons and the American Academy of Neurosurgery. He has served as a frequent examiner at the American Board of Neurological Surgery for oral examinations for final Board Certification and has been designated as a Scholar of the Board. He is consistently listed in Who’s Who in Medicine and Healthcare as well as in the Best Doctors in America. He holds a Presidential Endowed Chair at the Neurological Institute at Houston Methodist Hospital, and he has received numerous honors and awards, including the Wakeman Award for clinical research in the neurosciences, the Saul Horowitz Award Alumni Achievement Award from Mt. Sinai School of Medicine for clinical and basic research, and the Integra Award for Brain Tumor research, recently awarded in 2020 by the American Association of Neurological Surgery.