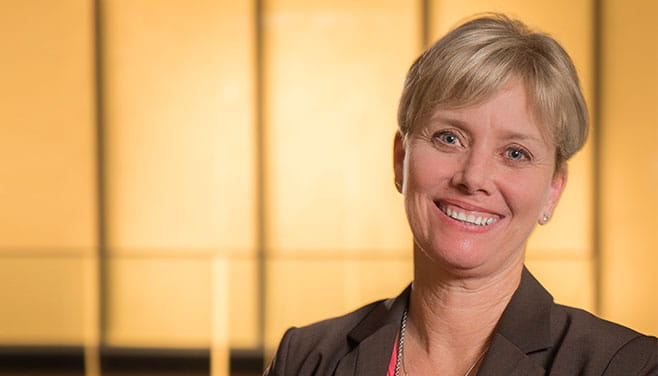 In her late twenties, Leslie Dial was diagnosed with hepatitis C. She lived her life normally as a wife, mother and professional in corporate America, showing no signs or symptoms of the disease for some 20 years. Then during an annual checkup she was told that her liver enzymes were elevated. This is when she was referred to Dr. Joseph Galati at Houston Methodist Hospital.

“Dr. Galati told me the hepatitis C was active and had caused cirrhosis,” Dial said. “He then took the time to map out what the journey ahead might look like.”

In December, 2010, Dial suffered an esophageal bleed. She was rushed to the Houston Methodist ICU where she received numerous transfusions. Houston Methodist hepatologist, Dr. Howard Monsour, identified the problem and stopped the bleeding with a banding procedure. After this episode, Dial was promptly placed on the liver transplant list.

While waiting for a new liver, Dial was told by Dr. Galati in April 2013 that she also had hepatocellular carcinoma, the primary cancer of the liver. She quickly underwent a transcatheter arterial chemoembolization (TACE) to restrict the tumor’s blood supply. Finally in July 2014, while working at home in the evening, she got the call she had been waiting four years to receive. She had a new liver.

“For me, keeping a positive attitude, being compliant with treatments, and having the support of my family was key to the success of this journey to date,” Dial said. “I am forever grateful to the doctors, nurses and staff at Houston Methodist. Their outstanding support and service gave me a second chance at life and I will never forget it.”