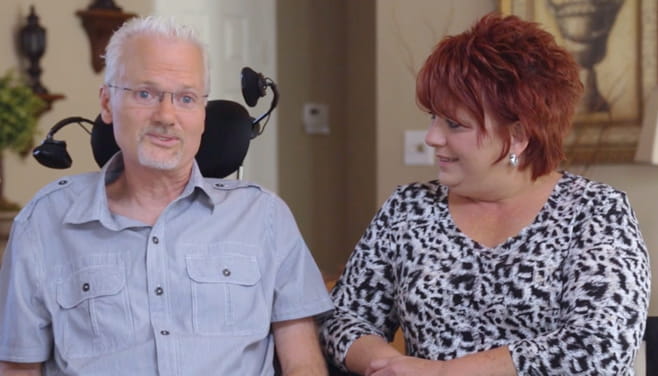 Pastor Kevin Kinchen's inspiring story about his experience as our patient families cope with the monumental challenges posed by amyotrophic lateral sclerosis.

Muscle weakness is the major symptom of ALS. In early stages, the weakness may present itself as a problem with muscle endurance. Twenty percent of patients may experience a compromise in the ability to speak as the first symptom. A patient may experience a range of symptoms which become progressively worse over time:

Pain is not a recognized symptom of ALS, but some may occur.

ALS does not usually affect the senses, ability to think, sexual function and bowel or bladder control; it will, however, eventually eliminate the ability to control muscles responsible for moving, speaking, eating and breathing. For example, ALS may affect the respiratory system in several ways as the disease progresses:

The causes of ALS are unknown at present, but researchers are focusing on several possible theories, including gene mutations, overabundance of the neurotransmitter glutamate (which can be toxic to nerve cells), autoimmune response (in which the body’s immune system attacks normal cells) and the gradual accumulation of abnormal proteins in nerve cells.

ALS may be inherited in 5‒10 percent of cases (familial ALS), but the rest of the patients who contract the disease seem to do so at random (sporadic ALS). Most patients diagnosed with ALS do not have a history of ALS in any of their immediate family members.


Quite possibly, a "communal" process occurs in sporadic ALS that involves all these mechanisms.

Several different forms of motor neuron disease similar to ALS have been described.

For most patients with ALS, muscle weakness progresses over a three- to five-year period; a small number of people will see the same progression over a period as short as one year and 20 percent of patients may see the advancement of the disease take more than five years. The reasons for the variations are unknown and the course of the disease is difficult to predict on an individual basis.

One to two people out of every 100,000 will develop this disease a year. ALS affects men more than women in a 2:1 ratio, but after age 60, this rate evens out. The average age symptoms start to appear is between 53 and 57 years; about 80 percent of all cases start between the ages of 40‒70. ALS can occur in people of any race; the incidence of ALS is much higher in Guam, western New Guinea and select areas of the Kii peninsula of Japan.

Other factors that may increase the risk of developing the disease include smoking, exposure to lead and service in the military.