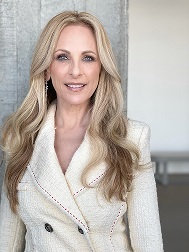 Marlee Matlin received worldwide critical acclaim for her film debut in Paramount Pictures' Children of a Lesser God, for which she received the Academy Award for Best Actress. At 21, she became the youngest recipient of the Best Actress Oscar and only one of four actresses to receive the honor for her film debut. In addition to the Oscar, Matlin received the Golden Globe Award for Best Actress in a Drama. In 2021, she was nominated once again as Executive Producer for the Live Action Short, “Feeling Through.” She also co-starred in the Sundance Film Award winning film CODA on AppleTV+.

Though Matlin lost her hearing when she was only 18 months old, she never let her challenges dictate her future or deter her dreams. Along with a successful Hollywood career, Matlin has dedicated herself to raising awareness for many humanitarian causes, including diversity and LGBT rights. She is a staunch advocate for children and a champion for those struggling against domestic abuse and addiction (battles she knows well).

In 2015, Matlin developed “Marlee Signs", the first celebrity-driven app teaching basics of American Sign Language on mobile devices. In 2016, Matlin returned for her third appearance at the Super Bowl, signing the National Anthem alongside Grammy-winning and Platinum-selling artist, Lady Gaga. Matlin has also helped raise awareness for better hearing health for millions of deaf and hard of hearing children and adults in developing countries, in support of the Starkey Hearing Foundation.

Since winning the Oscar and Golden Globe for Children of a Lesser God, Matlin has starred innumerous features including Walker, The Player, Hear No Evil, It’s My Party, and What the Bleep Do We Know. She has also starred in TV films Bridge to Silence, Against Her Will: The Carrie Buck Story, Dead Silence, Freak City, Where the Truth Lies, and Hallmark Hall of Fame’s Sweet Nothing in my Ear.

Matlin also starred in her own NBC series Reasonable Doubts opposite Mark Harmon and the Emmy Award-winning Picket Fences. Matlin was twice nominated for a Golden Globe Award for Best Actress in a Television Drama as well as the People's Choice Award. She has been nominated for four Emmy awards for her appearances on Seinfeld, Picket Fences, The Practice and Law and Order: SVU. Matlin starred for seven years on the award winning drama The West Wing, and has made numerous guest appearances including ER, Desperate Housewives, CSI: New York, Extreme Makeover: Home Edition, Desperate Housewives, Nip/Tuck, CSI, Glee, and Family Guy. In 2007 Matlin joined The L Word for three seasons. From 2011 to 2017, Matlin starred in the Peabody Award-winning series, Switched at Birth. Matlin was a series regular on the third season of the ABC drama Quantico.

Matlin broke barriers once again when she starred on ABC’s Dancing with the Stars, and in 2015 she returned to the stage after a 30 year hiatus and made her Broadway debut in the revival of the Tony Award-winning musical Spring Awakening.

Matlin makes her home in the Los Angeles area with her husband, a law enforcement officer, and their four children.

More to Explore in Giving