Production of a full smile requires both the elevation of the upper lip and a slight depression of the lower lip.  Loss of this downward motion of the lower lip produces an uneven smile and loss of facial harmony. Lower lip weakness usually results from division of the facial nerve (marginal mandibular branch) during a face lift or cancer surgery.  Alternately, the functional loss can be congenital in nature. 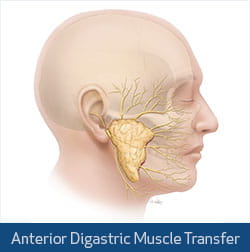 Transfer of the anterior belly of the digastric muscle is performed through two separate incisions.  The initial incision is created several centimeters below the border of the jaw providing access to the digatric muscle.  After the muscle has been identified a tunnel is created below the skin joining the neck wound and lower lip.  A second incision is now created where the red colored skin of the lip meets the adjacent lighter colored skin.  The tendon that joins the two halves of the digastric muscle is divided and the cut end is transposed though the previously made tunnel.  Great care is taken not to disrupt the tiny nerves supplying the anterior digastric muscle which is left attached to the anterior jaw. Intermittently a cross face nerve graft will be used to neurotize the muscle. After securing the cut end of the digastric muscle to the lower lip, the skin incisions are closed utilizing plastic surgery techniques.

Recovery
A single overnight stay in the hospital is usually required after a digastric muscle transfer.  Patients are asked to follow a soft diet and avoid exercise, heavy lifting and brushing their teeth until cleared by the operating surgeon.  A home physical therapy program is initiated after the initial healing phases in an effort to achieve natural appearing downward movement of the lip.

Learn how facial paralysis surgery and functional restoration can help you.

Learn how facial paralysis surgery and functional restoration can help you.