If only… How early colorectal cancer screening can save lives

In a span of two months, life changed dramatically for Melanie Bass.

Facing what she called a “crazy hectic summer schedule,” and just shy of her 50th birthday, the Magnolia resident got what she thought would be a routine annual checkup for colorectal cancer.

“I wanted to get ahead of this,” she said. So she had a colonoscopy and doctors discovered a 3.5 centimeter cancerous tumor. It was certainly not what she expected, but she immediately went to Dr. Eric Haas, Chief of Colon and Rectal Surgery at Houston Methodist Hospital to get the tumor successfully removed. 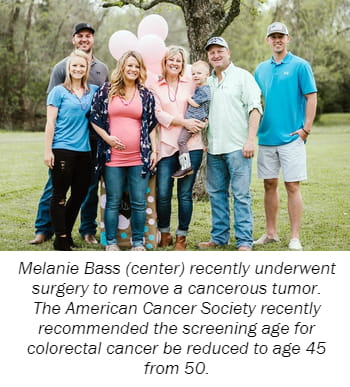 “I had no symptoms, I had no problems. If I had done this five years ago, this would have been removed as a polyp,” Bass said. “The doctors here took care of me. I’m good, I fought through it, and now I’m cancer-free.”

Colorectal cancer is the second leading cause of cancer-related deaths in the United States, affecting both men and women. When treated early, it is nearly 100 percent curable.

Haas also said the idea behind screening at a younger age is to try to find polyps and remove them during a colonoscopy to prevent cancer.

“The rate of cancer for people age 50 and over has been going down because we believe more and more people are getting the message that screening does help save lives,” he said.

Haas said doctors across the country have been conducting research to determine why this is happening.

“Dietary factors such as eating processed foods, or lifestyle factors such as not getting as much exercise as we should can play a part, but the bottom line is we really don’t know the exact reasons just yet,” he said.

For Bass, the experience has served as a wakeup call. As a mother of three adult children and two grandchildren, she said she maintains a very active and busy life, but has had to make some lifestyle changes since her surgery.

“I tell everybody now go get your colonoscopy. You’re not aware of anything going on when it’s happening, and it’s like you’re taking a little nap,” she said. “You should not be scared or hesitant to get it done,” she said. “Just go do it.”

Haas described Bass’ situation as a true success story. “Melanie is younger than age 50, and she was quite shocked when she heard the devastating news that she had colon cancer. She was lucky in the sense that she doesn’t need chemotherapy or radiation treatments, and that we were able to remove the cancer using advanced minimally invasive techniques. She recovered beautifully.”

Haas also it’s important to identify the symptoms risk factors or symptoms of colorectal cancer as soon as possible.

“If you discover that you have risk factors such as a genetic history of colon cancer, or common symptoms include blood in your stool or a change in bowel movements or anything like that, then at any age you really need to see your doctor and get screened.”

Bass said the experience also helped to make her a fierce advocate for early screening.

“I’m five weeks out of surgery and feel great. Almost like I didn’t even have it.”