Spinocerebellar ataxia (SCA) is characterized by degeneration of the brain and spinal cord that mimics Huntington’s disease, Parkinson’s disease and amyotrophic lateral sclerosis (ALS), with progressive clumsiness and balance difficulties typically leading to total disability and death. The $6 million, five-year clinical trial readiness grant awarded to Houston Methodist and led by Tetsuo Ashizawa, M.D., will focus on several anticipated investigational therapies for SCA1 (the fastest progressing) and SCA3 (the most common type in the U.S. and Europe). 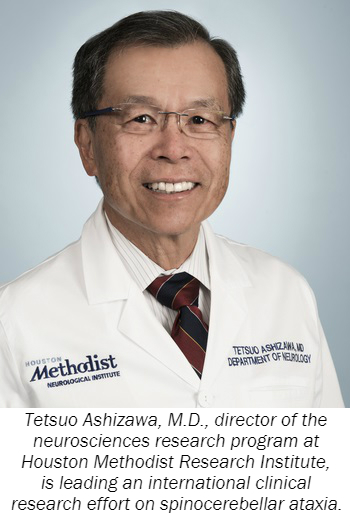 “Rare diseases, like inherited ataxias, are often a window to understand more common diseases with similar manifestations,” said Ashizawa, director of the neurosciences research program at Houston Methodist Research Institute. “Colleagues at several U.S. and European locations are showing promising results in preclinical research for investigational therapies focused on SCA1 and SCA3. Now is the time for us to bring therapies to patients.”

The multi-site project will include well-established ataxia physicians and scientists in approximately 20 U.S. locations, as well as the European Ataxia Study Group, a consortium comprised of 58 investigators from 23 institutions across Europe. Over the next several years, they will

Most clinical trials to date have included patients at all stages of disease. Ashizawa and colleagues say evidence shows administering therapies in the earliest stages could have the most benefit. The goal is to bring these investigational therapies to patients within the next several years.

Ashizawa is a neurologist in the Houston Methodist Neurological Institute. He led the previous NIH-funded natural history study of spinocerebellar ataxias from 2009-2013, and he still serves on the Medical Research Advisory Committee of the National Ataxia Foundation.

Spinocerebellar ataxia typically appears in adults and causes loss of neurons in the brain’s cerebellum, which controls coordination, leading to a progressive decline of hand, speech and eye movement.

Click here to learn more about the Clinical Trial Readiness for SCA1 and SCA3 study.

NOTE: U01NS104326 is a Cooperative Agreement NIH grant from NINDS.