After running non-stop for nearly 50 years, Houston Methodist Hospital is closing the operating rooms where surgeons performed some of the world’s firsts in heart surgery. 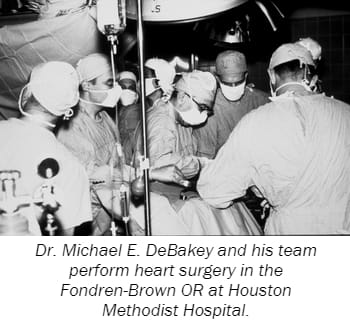 Under the leadership of cardiovascular surgery pioneers Michael E. DeBakey, M.D. and George P. Noon, M.D., the Fondren-Brown ORs were a place of discovery and innovation -- including the world’s first coronary artery bypass; the first successful autotransplant for cardiac malignancy; the first implantation of the MicroMed DeBakey Ventricular Assist Device; the nation’s first percutaneous implantation of a left ventricular assist device (LVAD); the first repair of a large aneurysm of the aortic arch and the world’s first multi-organ transplant that included a heart, lung and two kidneys from one donor.

“It was a very exciting time to be a heart surgeon because we were finding new ways to save lives,” said Noon, who was involved in more than 600 of the more than 1,000 heart transplants performed in the Fondren-Brown ORs. “It’s a great feeling to know that we performed so many groundbreaking surgeries in those ORs over the past 50 years.”

In these ORs, DeBakey developed the Dacron graft, which he invented on his wife’s sewing machine. Dacron grafts are now commonly used to replace or repair blood vessels, and to repair or replace parts of arteries that are damaged, such as aortic aneurysms.

Dr. DeBakey originally wanted to use nylon or vinyon, the fabric used to make parachutes, but the Foley’s department store in downtown Houston was out-of-stock, so the clerk suggested Dacron. DeBakey soon determined that Dacron was superior because nylon and vinyon degenerate over time.

“His competitors were years behind Dr. DeBakey because he was lucky enough to stumble across Dacron and smart enough to continue using it,” said Michael Reardon, M.D., a cardiothoracic surgeon who performed the first successful autotransplant at Houston Methodist Hospital.

DeBakey also created the first post-surgical ICU in the United States near the Fondren-Brown ORs.

“In the early days of heart surgery you had to sit by a patient’s bedside with them because they just went to a regular patient room,” Reardon said. “After he created the ICUs, Dr. DeBakey would make one of us stay in the ICU for two straight months to care for patients. There was no going home. It was difficult, but it taught us discipline and that the patient was our responsibility. It made me the surgeon I am today."

DeBakey created the Fondren-Brown ORs to perform big, open surgeries that set the standard for ORs in the United States. The Walter Tower will set a new standard.

“This new technology will allow us to do more complex procedures using a minimally-invasive approach,” said Mahesh Ramchandani, M.D., chief of cardiac surgery at Houston Methodist DeBakey Heart & Vascular Center. “These ORs will focus on imaging which will allow us to see things we haven’t seen before so we can do things we’ve never done before. Dr. DeBakey loved progress and he would be very proud of this new facility.”