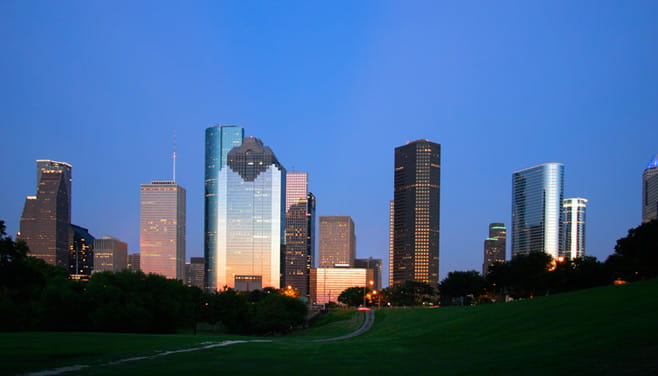 Houston is the fourth largest city in the United States and a hub for the energy, aerospace and engineering industries.

The Port of Houston is an attractive destination for international companies doing business around the globe.

Houston is a diverse and international city, in part because of its many academic institutions and strong industries.

More than 90 languages are spoken in the city. Houston also has among the youngest populations in the nation. Houston is the nation's demographic future with a mixture of Caucasian, Hispanic, African-American, and Asian, among other residents.

The Bayou City offers over 40 excellent higher education options, including:

It is a diverse city with a flourishing business, entertainment and arts district. It is also the energy capital of the world and boasts a robust industrial, educational, financial and commercial center.

Recreation and Cultural Activities in Houston

Houston caters to residents and visitors of all tastes with myriad cultural attractions, recreational activities and unique sites to explore.

You will find more than 11,000 restaurants scattered throughout the city and a number of live entertainment destinations, amusement parks, art museums and historic landmarks. Houston also hosts the Houston Livestock and Rodeo which attracts more than two million people each year.

The arts and entertainment scene in Houston is one of the best in the country. With a large concentrated Theatre District in the downtown area, Houston offers a variety of options for theater-goers. Additionally, Houston is one of only a few cities that has permanent professional resident companies in opera, ballet, music and theater.

Watch a performance by the Houston Symphony in Jones Hall, spend the day at the Contemporary Arts Museum, or cheer on the Houston Astros major league baseball team at Minute Maid Park, which features a retractable-roof stadium that can be opened or closed within a 15-minute period, depending on the weather.

If you enjoy being outdoors, you will find more than 52,000 acres of green space in Houston's city parks and can experience activities like golfing, fishing, sailing or even horseback riding.

Key destinations around Houston include these following attractions:

Local public transportation is provided by the METRO Bus and Rail System. METRORail offers convenient accessible service within the heart of the city between downtown Houston and NRG Park, including the Museum District and the Texas Medical Center.