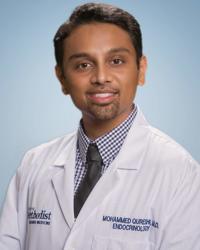 He returned to his hometown of Houston where completed his fellowship training in Endocrinology, Diabetes & Metabolism at the renowned Houston Methodist Hospital/Weill Cornell Medical College in the Texas Medical Center, ranked among the Top 10 programs by the U.S News and World Report. He also trained at Texas Children's Hospital as well as UT MD Anderson Cancer Center during his fellowship.
​
Dr. Qureshi loves to travel and go running during his spare time.