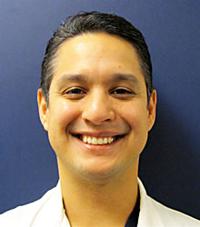 Dr. Michael Hold is a board-certified OBGYN and the medical director of the Houston Methodist Childbirth Center at West Hospital. He attended Texas A&M at Galveston and received a Bachelor of Science degree in Marine Biology.  Dr. Hold received his medical degree from the University of Texas Medical Branch at Galveston. He completed his residency in obstetrics and gynecology and held the position of chief resident during his time at the University of Texas Medical Branch at Galveston. Dr. Hold is also a fellow through the American Congress of Obstetricians and Gynecologists.  He enjoys fishing, camping, SCUBA diving, live music, and traveling.  Most of all, he enjoys spending his free time with his wife, who is a Psychiatrist, and his wonderful son. Dr. Hold’s areas of interest include obstetrics and gynecology and gynecologic surgery.  He specializes in minimally invasive surgery and he uses the da Vinci robotic surgical system.  Dr. Hold speaks fluent Spanish and he has patients from across Latin America.