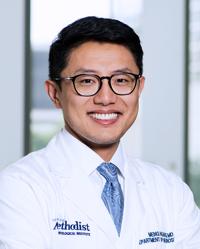 Dr. Huang was raised in Shreveport, Louisiana and obtained his undergraduate degree from Washington University in St. Louis, Missouri. He received his Doctor of Medicine (MD) from the University of Texas Medical Branch in Galveston, where he studied on academic scholarship and graduated with Alpha Omega Alpha Honor Medical Society junior-inductee distinction. He completed neurosurgery residency at Houston Methodist Hospital. During residency, he had the opportunity to serve as a specialist registrar in the Department of Neurosurgery at St. George’s Hospital in London, UK. As Chief Resident, he achieved the American Association of Neurological Surgeons National Resident Top Gun Competition First Place Award for the Spinal Surgery Skills station.

Professionally, he became keenly interested in the challenging subfield of spine surgery, and specifically, endoscopic and minimally invasive spine surgery. He was selected to complete advanced post-residency fellowship training at the renowned University of Miami Neurosurgery Spine Fellowship under the directorship of internationally recognized surgeon Dr. Michael Wang. There, he was trained in endoscopic spine surgery techniques including awake (without general anesthesia) endoscopic lumbar spinal fusion.

Dr. Huang believes that elective spine surgery should only be offered when all conservative measures have been exhausted and there remains a clear clinical and anatomical indication for surgery. He is a proponent of designing minimally invasive surgical treatment plans based on the patient’s primary symptoms rather than the radiological imaging, which often shows a multitude of abnormalities, many of which may be unrelated to the patient’s symptoms. Dr. Huang takes pride in ensuring his patients’ thorough understanding of their condition and engaging them in shared decision-making regarding the goals of surgery. He considers it a great honor and privilege to have the opportunity to share his expertise and serve his Houston community.

BOARD ELIGIBILITY
American Board of Neurological Surgery