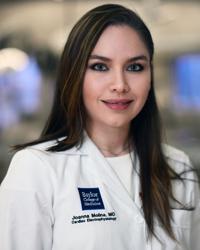 Dr. Molina was born in Tijuana and attended medical school at Universidad Autonoma de Baja California after obtaining the highest score statewide in the medical school entry examination. She then completed her Internal Medicine Residency at Baylor College of Medicine in Houston before being accepted as the first female Latin American medical school graduate to ever be accepted to the Texas Heart Institute Cardiovascular Fellowship program since its inception forty-eight years earlier. Two years later she was accepted as a Clinical Cardiac Electrophysiology Fellow, becoming the first Latin American medical school graduate to have ever done so. After completing her Electrophysiology Fellowship she joined the Baylor College of Medicine as an Assistant Professor of Medicine (Cardiology) where she performs some of the most complex procedures in the field of cardiac arrhythmia management. In addition to serving on the teaching faculty for the Cardiac Electrophysiology Fellowship, has garnered an international reputation as one of the best teachers in her field and has been invited to numerous conferences as both speaker and instructor of training and practicing Latin American cardiac electrophysiologists.