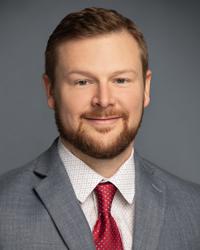 A native of Houston, David Burkland earned his medical degree at Baylor College of Medicine where he was elected to the Alpha Omega Alpha Honor Society. He continued his career at BCM, completing his internal medicine residency. He later attended the Texas Heart Institute for his training in cardiology and electrophysiology where he was elected to serve as chief cardiology fellow. While at Texas Heart, Dr. Burkland developed a passion for designing and performing pre-clinical testing of novel medical technology. He led multiple engineering teams from Rice University and Texas A&M University and worked closely with multidisciplinary ventures at TMC Innovations. He has authored and co-authored a variety of innovation publications and holds multiple patents in medical technologies.
His mission is to provide top quality patient care while maintaining and pushing the boundaries of innovation in cardiac electrophysiology. He has a special interest in ablation of atrial and ventricular arrhythmias using zero fluoroscopy techniques.