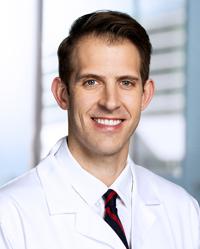 Alexander Stark, MD, surgical oncologist, Department of Surgery, recently joined the Houston Methodist Cancer Center. Stark specializes in the surgical and multidisciplinary management of patients with melanoma, sarcoma, gastrointestinal, and peritoneal surface malignancies. A native of Minnesota, Stark attended Northwestern University in Evanston, IL, where he graduated magna cum laude and with Honors in Philosophy. He obtained his medical degree from the University of Chicago's Pritzker School of Medicine, where he graduated as a member of the Alpha Omega Alpha Honor Medical Society. He trained in General Surgery at the University of California, Los Angeles, where he received awards for both clinical excellence and Humanism in Medicine, and he completed a fellowship in Complex General Surgical Oncology at The University of Texas MD Anderson Cancer. He has been awarded a Houston Methodist Academic Institute Clinician Trialist Award.

BOARD ELIGIBILITY
Complex General Surgical Oncology | American Board of Surgery

BOARD CERTIFICATION
General Surgery | American Board of Surgery