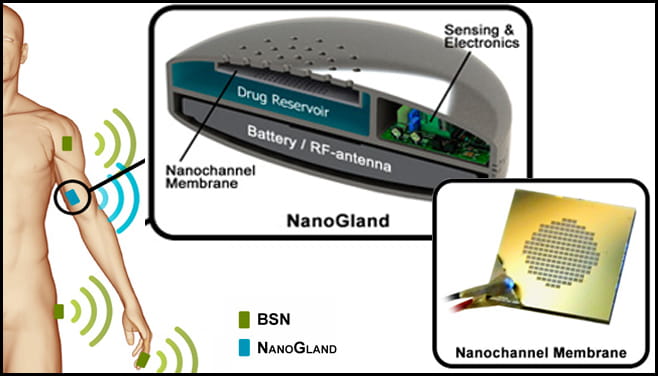 Problem: Medical practitioners have long realized the need for personalized treatment that can synergize with the body’s innate response to diseases and medical conditions. Currently, the most common approaches to drug administration in medicine are 1) oral or intravenous delivery of a “bolus” (a large amount of drug delivered all at once) at regular intervals and 2) intravenous slow infusions. Bolus administration is commonly associated with adverse side effects derived from a temporary regional overdose following each administration to the patient. Infusions are required in cases of highly toxic drugs (typical of numerous chemotherapeutics), which force patients to be hospitalized for hours to days in order to monitor the severe side effects of the treatments. This conventional practice is arguably a rudimentary and impersonal approach to drug delivery, where therapeutics are often inefficiently delivered at the maximum tolerated

dose (MTD). Can we instead mimic the body’s natural control over the release of molecules with accurate dosing and precise timing? The answer to personalized treatment can be found

in nanotechnology and nanoscale fluid mechanics.

A conceptual design of our implantable, artificial NanoGland incorporated into a distributed biosensor network (BSN). The first inset (from left to right, top to bottom) depicts an implant prototype, containing the nanochannel membrane, the drug reservoir, sensor, telemetry, and control electronics, and a battery or RF antenna for remote powering. The second inset is an actual fabricated nanochannel membrane complete with surface deposited gold electrodes.

of dendritic fullerene 1 (a free radical scavenging agent) from a nanochannel membrane.

Approach: Steady-Release NanoGlands: Nanofluidic membranes reveal counterintuitive mass transport phenomena in nanochannels caused by fluid confinement. Our research in the Department of Nanomedicine has shown that by shrinking the channels by a factor close to the sizes of the diffusing molecules, it was possible to achieve a saturated, concentration-independent transport through the membranes. This shows promise for controlled transport of molecules and therapeutics. As such, we focus on the development of nanopores, nanochanneled membranes and nanoscale fluid mechanics. To advance this technology, we have used sacrificial layer techniques to reproducibly fabricate nanochannels as small as 3 nm. By exploiting nanochannels in passive systems, we were able to achieve a controlled and constant delivery of therapeutics and nanoparticles, in vitro and in vivo, for extended periods of time, while mimicking the basal and continuous release of molecules from glands to the rest of the body. This functionality cannot be attained at the macro- or microscale without the use of complex pumps and other moving components, because the diffusion of molecules is “Fickian,” which means that the release rate is dictated by the gradient of the molecular concentration.

Active-Release NanoGlands: A time-variable rate of release can be also achieved through electrokinetic phenomena that occur when an electrical potential is applied between the inlet and outlet of the channels. Electrokinetic phenomena, such as electrophoresis and electroosmosis, have been widely studied in microchannels. We have developed implantable nanochannel membranes with electrodes near the membrane inlet and outlet and demonstrated that the delivery of molecules in proportion to the applied electrical field is up to 10 times higher than for passive delivery. Additionally, by reversing the polarity of the applied electrical field, the molecule release can completely stop. As opposed to the rudimentary conventional practice where drugs are “digitally” administered, such nanochannel technologies afford “analog” time modulation, where timing, duration and frequency of administration can be precisely adjusted as needed. This approach mimics the time-variable release of molecules in the body and can enable new delivery regimens, including “chronotherapy,” the synchronization of drug delivery with optimal times during the circadian cycle of the body.