Brain metastatic tumor cells have intrinsic or are able to acquire brain-like characteristics to assimilate into the neural network. Especially neurotransmitters, gliotransmitters, neurotrophic factors, and neural cytokines, called neuroactive substances (NSs) are the most abundant and key intercellular communication signals in the brain. Tumor cells are most likely to leverage them to favor their outgrowth in the brain. Chronic stress is often accompanied by aberrant or imbalanced levels of brain NSs and is prevalently (50-75%) experienced in cancer patients. Epidemiological and clinical studies provided strong evidence for links between chronic stress and metastasis, especially in younger female patients. Triple negative breast cancer occurs most frequently in younger women with a higher prevalence of abdominal obesity and metabolic syndrome linked to vulnerable neuroendocrine regulations to stress. Clinically, intake of beta-blocker drugs, in reducing stress-related signals, is associated with improved metastasis-free survival in TNBC patients. We have showed that chronic stress promotes the development of brain metastasis from TNBC and thus hypothesize that a chronic stress-induced brain metastatic niche or even a pre-metastatic niche with aberrant NSs creates a favorable or receptive microenvironment for TNBC brain metastasis. Our goal is to study how TNBC cells and various neural cells co-opt chronic stress-altered NSs in the metastatic and pre-metastatic niches in the brain and identify effective therapeutic or preventive strategies for TNBC brain metastasis. 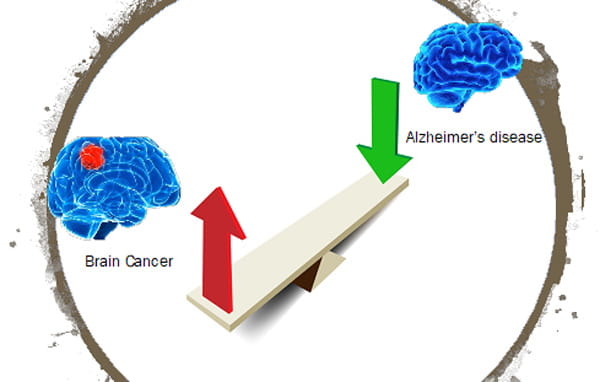 In this project, we investigate how the presence of tumor cells in the brain would reduce pathogenesis of Alzheimer’s disease (AD). Both AD and brain cancer increase with age. However, several comprehensive epidemiologic studies with more than one million participants have reported a consistent inverse association between the two diseases, and the risk of AD in individuals with a history of cancer was decreased up to 35%. In addition, many factors upregulated in cancer to sustain growth and cell survivals are founded downregulated in AD, contributing to neurodegeneration. Since astrocytes are important in AD pathogenesis through interactions with adjacent neurons, microglia, and oligodendrocytes as well as secretion of significant quantities of Aβ to increase amyloid burden in the brain, we hypothesize that the tumor-astrocyte interactions suppress some astrocyte-initiated AD pathogenesis pathways, including reducing Aβ production from neurons and astrocytes, facilitating Aβ break-down by astrocytes, and regulating neuroinflammation. In this study, we will apply novel system biology modeling and multi-omics technology to investigate how astrocyte-tumor crosstalk regulates AD pathogenesis and identify novel crosstalk target for developing new therapeutic strategies for combating AD.


Medulloblastoma (MB) is the most common malignant brain tumor of childhood. Although outcomes have improved in recent decades, new treatments are still needed to improve survival and reduce treatment-related complications. MB sub-types Groups 3 and 4 represent a particular challenge due to their intra-group heterogeneity, which limits the options for “rational” targeted therapies. We developed a systematic drug repositioning platform that integrates a non-parametric, bootstrapping-based simulated annealing algorithm and a 3D functional drug network to characterize dysregulated driver signaling networks, thereby identifying potential drug candidates. From over 1,300 drug candidates studied, we identified five members of the cardiac glycoside family as potentially inhibiting the growth of Groups 3 and 4 MB, and subsequently confirmed this in vitro. Systemic in vivo treatment of patient-derived orthotopic xenograft (orthotopic PDX) models of Groups 3 and 4 medulloblastoma with digoxin, one of the five cardiac glycosides, prolonged animal survival at plasma levels known to be tolerated in humans. Furthermore, single-agent digoxin has efficacy comparable to 20 Gy of radiation. The treatment of mice with a combination of radiation therapy and digoxin resulted in a statistically significant improvement in survival over the radiation-only group. These results demonstrate the power of the systematic drug repositioning method in identifying a potential treatment for MB. Our strategy could potentially be used to accelerate the repositioning of treatments for other human cancers that lack clearly defined druggable targets. 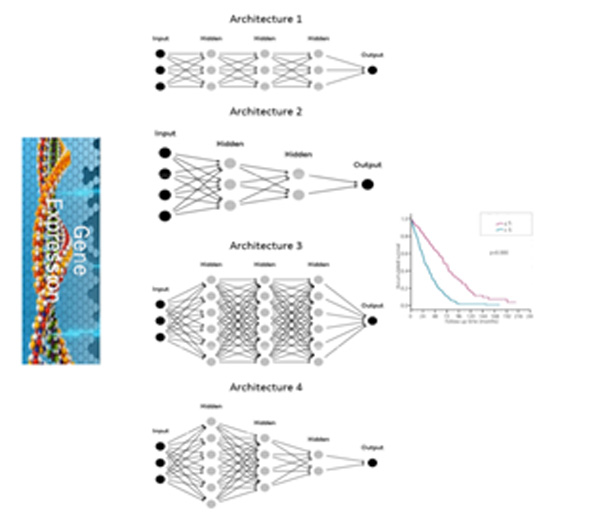 This project aims to apply deep machine learning to identify specific novel genes that are potential biomarkers or therapeutic targets of glioblastoma (GBM). Conventional machine learning approaches have been used to determine the gene expressions that are prognostic to glioblastoma patient survival. These approaches often require dropping a large number of genes in order to fit the survival outcome, hindering biological pathway interpretation and introducing random bias toward the selected gene factors. Using 3,581 differentially expressed genes from the GBM-specific TCGA database as inputs, we developed a deep learning model to predict patient survival prognosis. The deep learning features are combined with age, gender, MGMT methylation, G-CIMP, IDH1/2 mutation and cancer subtype to an integrative prognostic model.

Get updates on Neurosciences News