Transcranial Magnetic Stimulation
Transcranial magnetic stimulation (TMS) technologies hold great promise in achieving a deeper understanding of causal mechanisms rather than of just neural correlates of brain function. Because of this and because these devices can noninvasively modulate neural activity and plasticity in a long-lasting manner they are also proving useful in drug-free neuromodulation treatment. The available TMS devices, however, can stimulate only one cerebral cortical site at a time, and are not portable because of the large size of their stimulus-delivering electromagnetic coils and the high amount of current needed to power them.

In collaboration with Henning Voss, PhD of Weill Cornell Medicine, Santosh Helekar, MD, PhD has recently developed a new portable wearable multifocal magnetic stimulation device called transcranial rotating permanent magnet stimulator (TRPMS) that depends on rapid movement of high field strength permanent magnets. The TRPMS device is a non-invasive wearable neoprene cap with microstimulators that incorporate customized hardware and software in a battery-operated stimulator console. The console is controlled by an app on a tablet or smart phone to deliver magnetic stimulation to the brain. In pilot studies in nearly 200 subjects we have determined that this device can deliver low field focal magnetic stimuli to at least 6 cortical sites without producing any adverse effects. We have observed modulation of spontaneous motor unit potential activity in thenar muscles following stimulation of their site of representation in the primary motor cortex, as well as modification of the strength of cortical functional connectivity. The multifocal stimulation capability of the device offers for the first time the possibility of modulating the activity of cortical neural networks by stimulating multiple nodes using varied spatiotemporal stimulus patterns. 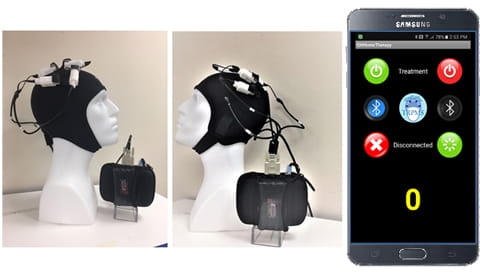 TRPMS cap with microstimulators placed on sites corresponding to the primary motor cortex (PMC) on the left side, and the cortex surrounding the PMC, the lateral premotor cortex and supplementary motor cortex on the right side. The smartphone screen image on the right shows the Android app used to operate the device.
Ongoing studies in our laboratory at present employ electrophysiological and neuroimaging approaches to measure neuromodulatory effects of TRPMS on cortical excitability and functional connectivity, and use this tool to study the neural mechanisms underlying perception and cognition. We are also developing and testing TRPMS-based therapeutic protocols in chronic ischemic stroke and stuttering.