On Health
Tips to Live By

What Breast Cancer Has Taught Me

For many years, I'd thought of breast cancer as this big bully that showed up unannounced and uninvited. The women who entered the fight with this bully didn't have a choice in the matter; and those who ignored the big bully would be pummeled to the ground. Like all bullies, it didn't like to be ignored. Those who took notice would meet the big bully on the school playground at 3 pm. Surrounded by spectators, these women fought for their lives. With their friends and family cheering, "Go Friend! Beat Cancer!" they'd give it all they had. If they were victorious at the end of the fight, they'd be given a title. In addition to mother, wife, daughter, sister, friend, they would also be deemed a "Breast Cancer Survivor."

On December 17, 2019, at age 41, I became one of these women. One month after my annual mammogram, I found a lump in my right breast. After a second mammogram, an ultrasound and a biopsy, I was diagnosed with invasive ductal carcinoma, triple negative breast cancer. With no history of breast cancer in my family, I was caught off guard by the diagnosis. Breast cancer was not in my plans!

Like so many other women with the same fate, I grabbed my pink boxing gloves and prepared to beat down this bully. Instinctively, I had subscribed to the notion that this was indeed a fight. I prepared myself for battle, but it felt like I was wearing someone else's gloves. As a black woman in a male-dominated society, education system and corporate culture, I've had my share of fights. I've gotten into a lot of good trouble, so there was no question of whether I was strong enough for this fight. Still, the term didn't sit well with me.

As a hashtag on a pink t-shirt worn at a breast cancer awareness event, it was easy for me to fall in line with the "fight" against breast cancer. But now that I was the one who'd be "fighting," I struggled to make a connection with the well-received and often-quoted slogan. As I dissected my feelings, I decided that the only positive outcome of this fight was to win! I would be the winner, and my opponent, breast cancer, would be the loser. In a "fair" fight, we'd be weighed to equalize the playing field. But cancer is not fair — no human is in its weight class.

I decided that a "fight" was not the connotation I wanted to hang over my journey. A "fight" would permeate my spirit and my emotions as I progressed through the experience itself. Every lab report, doctor's report, status or change would be measured during the fight. Was I winning? Or was cancer winning? How much fight did I have left in me? Was I strong enough? How many battles could I lose and still win the war? This wasn't an emotionally stable option for me.

In life, we have the power to choose how we feel about the hand that we've been dealt. With a cancer diagnosis, the only control I had was how I chose to deal with that hand. And I decided that I would do it my way … not the way that others said I should do it. Even if "others" were millions of people who stood behind the popular slogan, I held the keys to my own narrative. Instead of a fight, I chose a different angle. I chose to view it more positively, as something I could relate to. Something that I had plenty of experience with. Something more methodical. Instead of a fight, I would rely on my experience as a project manager and engineer to navigate my journey as a project. The most important project of my life, but a project all the same.

A project is a collaborative effort that is carefully planned to achieve a specific result. Most projects have a vision statement (an idealistic, emotional future outcome) and a mission statement (summary of the project's goals). These are the two items that you revisit when you need to make tough decisions or when things aren't going well. It's your North Star. As I visualized myself on this journey, I envisioned a life where breast cancer had no power over me. I would champion my journey by holding on to my core values of faith, positivity and perseverance. Now, this sounds great. But how would I do these things? I needed an execution plan.

After some thought, I had committed to my "how" with the following behaviors:

1. Focus on the present — There is nothing like a BC diagnosis to remind you that life is a gift. Every day is precious. There is no time to wait for the storm to pass. I reminded myself to smile, laugh and dance in the rain. While I was excited to ring the bell at the end, I also chose to celebrate every milestone along the way, from dance videos with my infusion team during chemotherapy to selfies with my medical team. 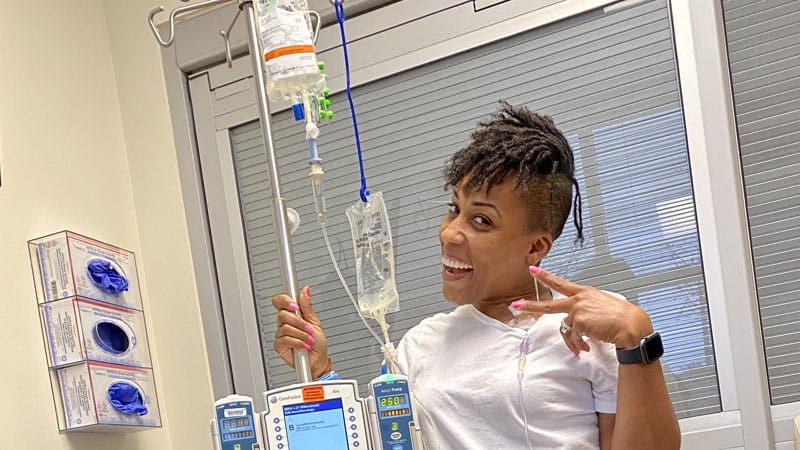 2. Keep the faith — Sure, plenty of bad things could happen. But they could also not happen. Worrying steals today's joy. Instead of focusing on the present, I'd waste valuable time thinking about what could happen. And guess what, if it really did come to pass, the fact that I'd already worried about it would not keep me from worrying about it again during the occurrence. So why worry twice? (P.S. I got a lot of practice with this during my journey.)

3. Encourage myself — I'm not perfect. And every day was not a good day. There were times when I had to give myself a pep talk to get out of bed. Times that I was harder on myself than I should have been. I allowed myself to have bad days, but I also refused to send and accept an invitation to my own pity party.

4. Use your network — People want to help you. Allow them to. As an independent person, it wasn't easy at first. I wanted to do everything on my own to show myself (and others) that I was strong. But my village was stronger. If you don't have a large support system, it's OK to ask for help. Seek the support you need. I was surprised by the number of resources available for breast cancer patients. Start with your medical team. Your nurse navigator is a great resource.

5. Share my story — I realize that I am not the first or last person to have a challenge. I wanted to be a light for others so I decided to share my journey publicly in an online blog, a transparent account of my journey empowered with confidence, strength, style and humor. Leveraging my passion for mentoring, I've developed meaningful relationships with others who have similar stories. You never know how your story might inspire someone.

From the moment I chose to navigate my journey this way, I was empowered to move forward. Sure, I didn't have control of the outcome, but I could control how I would behave, thereby contributing to my project's ultimate success. Through all the twists and turns along the way, I would frequently revert to those three important tenets to keep me going: vision, mission statement and execution plan.

Five months after my first chemo infusion on January 8, 2020, I received a complete pathological response. Prior to any surgery, my tumor was gone. I believe it was a perfect combination of medicine, faith and attitude that ultimately contributed to this outcome. By finding a method that worked for me, I was emotionally prepared for my journey.

As I prepare for reconstruction surgery this month, I find myself reflecting on my journey thus far. Breast cancer would cause me to lose my breasts and my hair (temporarily), but it wouldn't take my spirit, my personality or my livelihood. It wouldn't bully me into a "fight" that I had no desire to participate in.

I chose not to give it that power.

Tova Parker lives in Spring, Texas with her husband, Theo, college-aged son Dahki, and tween daughter, Sydney. She has documented her journey on her personal blog: www.prettysic.com.

Categories: Tips to Live By