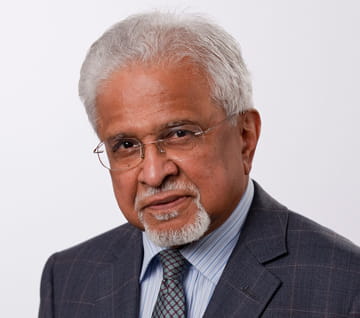 Working in the broad area of genome damage, its repair, and its influence on carcinogenesis and cancer therapy, Dr. Mitra has made several seminal discoveries during his prior tenure at Oak Ridge National Laboratory. These include, the characterization of the E. coli repair protein for the mutagenic DNA base O-6 methylguanine produced by mutagens and anticancer alkylating agents, the naming of the repair protein MGMT, and the cloning of human MGMT. More recently, Dr. Mitra’s laboratory characterized a new family of DNA repair proteins that was named NEILs for oxidative genome damage.

At the Houston Methodist Research Institute, the recent research focus of Dr. Mitra’s group is the enhancement of chemo/radiation sensitivity of tumor cells using targeted DNA repair inhibitors. After the early studies on MGMT inhibition, his current research aims to identify inhibitors for repair pathways for oxidative/radiation damage. Dr. Mitra’s research is supported by multiple R01 grants from the National Institutes of Health.