Navigation
Navigation
Navigation
These nanosyringes are microscopic carbon barrels made by shattering very long carbon nanotubes and then attaching a substance (polyethylene glycol or PEG) to make them
soluble in the blood. The nanovectors are targeted to the surface of malignant cancer cells by attaching an antibody that sticks to proteins highly expressed on cancer cells. They
are loaded with chemotherapy drugs that are only released when the nanovectors are placed near a cell surface. Once they have bound to a cell, the nanovectors act like slowrelease
drug delivery systems. Since the antibodies on the nanosyringes do not bind to normal cells, the side effects of chemotherapy are greatly reduced as only cancer cells
receive high levels of the anticancer drugs. This form of selective microinjection of chemotherapy only into cancer cells may revolutionize the treatment of cancer or even cure it. 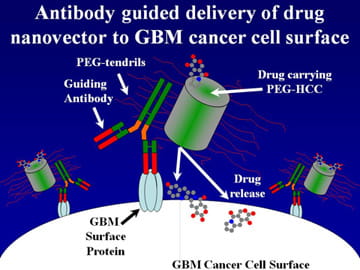 Nanosyringes to Administer Cellular Drug Pump Blockers
Chemotherapy is often initially successful and then begins to fail as the cancer cells become resistant to the drugs. One of the main reasons for this resistance is because cancer cells increase the number of cellular drug pumps they have in each cell. This allows the cancer cells to pump out the chemotherapeutic drugs that enter into the cell before the drug can kill the cancer.
Our researchers have developed a treatment to make the drugs more effective in killing the cancer by designing a way to disable these cellular drug pumps in each cancer cell.
By using targeted nanosyringes, both the drug pump inhibitors which disables these cellular drug pumps, and the chemotherapeutic drugs to kill the cancer, can be administered
directly to the cells’ surface. This benefits the patient because a smaller, yet targeted, amount of the chemotherapeutic drugs can be administered, thus minimizing unwanted side
effects. 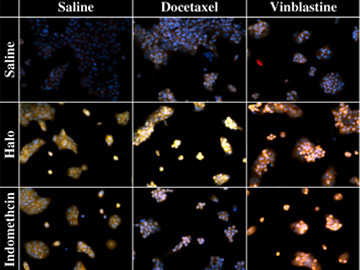 The above grid illustrates the Center’s research in using drug pump inhibitors with chemotherapeutic drugs to kill cancer cells. In this competition study, the cancer cells are given three colored dyes, red, green and blue, which the cancer cells can pump out of the cells, using the same pumps that they can use for pumping out chemotherapy drugs. The more colored the cells, then the less able the cells are at drug pumping.
Low concentrations of the pump inhibitor haloperidol(Halo) increase the green labeling of cells. The pump inhibitor indomethacin increases blue and red labeling. Docetaxel and vinblastine chemotherapeutic drugs cause a slight increase in red and blue labeling. However, Halo and docetaxel and indomethacin and vinblastine cause a large number of bright white cells, where all three dye levels are high. The pump inhibitors and the drugs have a cooperative effect on the ability of the cells to pump out the dyes. In cells where we block the cellular drug pumps with Halo or inodomethacin, the drug/dye pumps are inhibited, thus trapping the chemotherapy drug inside the cancer cell and resulting in the cancer cells dying. We find that Halo can increase the toxicity of docetaxel by a factor of three in some cancer cells, by blocking the drug pump these cells use for pumping docetaxel out of the cell. Indomethacin is very good at blocking the ability of cancer cells to pump vinblastine out of the cell, increasing its lethality by a factor of two.
Kenneth R. Peak Brain and Pituitary Tumor Treatment & Research Center
Houston Methodist Hospital - Texas Medical Center
6445 Main Street, Outpatient Center, Floor 24
Houston, TX 77030
713.441.8500