What are Jaw Deformities?

Deformity is defined as abnormal form; disfigurement; loss of the natural arrangement.1  Humans have two jaws—an upper and a lower—and jaw deformities are disfigurements of one or both jaws. The lower jaw is a single bone, the mandible (Figure 1). 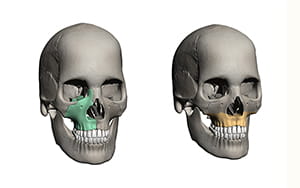 The upper jaw is a functional unit composed of four separate bones: the right and left maxillae and the right and left palatine bones; with regard to the latter, we are more specifically referencing the parts of these bones located below the zygoma (i.e., the cheek or malar bone). Clinically, the upper jaw is also called the ‘maxilla,’ a term that can be confusing because it is also the name of a bone (Figure 1). Henceforth, the term maxilla will be used to refer to the upper jaw.


Some jaw deformities occur in utero and are present at birth, while others are acquired later in life. They originate from many causes: genetic abnormalities, deformations, intrauterine disruptions, diseases, injuries, or abnormal function.

Jaw deformities affect at least one of the geometric properties of the jaws:

For a given patient, a jaw deformity can be the primary problem or it can be secondary to disease, injury, or functional impairment. One instance of a patient for whom a deformity is the primary problem is a woman with a familial history of mandibular prognathism who has developed this condition during puberty. Examples of secondary deformities include a young man with an anterior open-bite from condylar destruction resulting from juvenile arthritis (a disease), a teenager with retrognathia and facial asymmetry caused by condylar fracture and TMJ ankylosis during childhood (an injury), and a patient with anterior open-bite due to mouth-breathing (functional impairment).