During the physical examination, one determines the position of the maxilla and mandible in three-dimensional space. This is done separately for each facial axis: anteroposterior, vertical, and transverse. 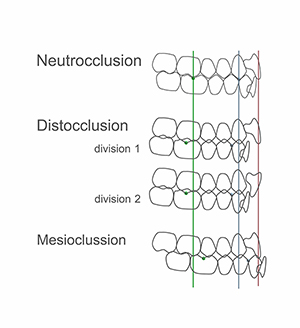 Finally, for the incisal region, we measure the overjet, which is defined as the horizontal distance between the incisal edges of the upper and lower central incisors. When the lower incisal edge coincides with the upper, the overjet is zero. When it is behind, the measurement has a positive value; when in front, it will be negative. The ideal overjet is +2mm.

Distocclusion can occur in many different configurations:

When assessing the facial profile, the patient should be in standard anatomical alignment (i.e., head in the NHP), with the clinician observing from the side. While in this position, the clinician imagines a coronal plane of reference—a plane that can be tangential to soft-tissue glabella, soft-tissue nasion, or the anterior surface of the cornea. Concurrently, the clinician infers the anteroposterior position of the jaws by assessing the position of the lips and chin in relation to this paracoronal plane (Figure 5). 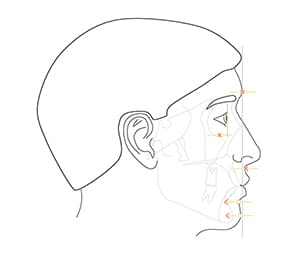 No perfect reference plane exists for determining the anteroposterior position of the jaws. Nasion can be obscured in Asian patients, as it is commonly located posterior to the cornea; glabella can be distorted in frontal bossing; and distances from the cornea are difficult to gauge clinically. Notwithstanding these limitations, our clinical impressions are reliable because our brains have the innate ability to discern the correct anteroposterior position. 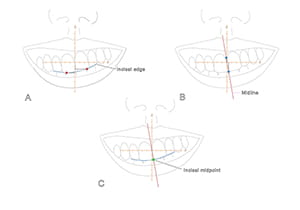 Rest-incisal-show should be measured on an upright patient, as it can increase when the patient is supine (Figure 8). Additionally, the eyes of the examiner should be level with the patient’s lips, as looking from above hides the teeth, and viewing from below exposes them. Negative incisal shows are difficult to measure. To overcome this challenge, the authors place a piece of wax on the lingual surfaces of the upper incisors, extending it downward below the lip. Subsequently, the clinician asks the patient to relax his lips and marks (on the wax) the position of the upper lip stomion. Finally, the clinician pulls the upper lip up and, with a caliper, measures the distance from the mark to the incisal midpoint (Figure 9). Some patients may have incisal attrition, which is the erosion of the incisal edges due to grinding. In this situation, the examiner should add the amount of tissue loss to the measurement. 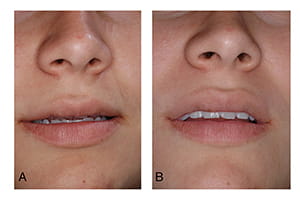 As stated previously, smile-dento-gingival-show is also used to determine the vertical position of the maxilla. Smile-dento-gingival-show is the amount of central incisor and labial gingiva displayed when smiling. Tooth show is measured as a percent of its height, while gingival show is measured in millimeters. While smiling, most patients with normal vertical maxillary position display 100% of their incisors19 and up to 2 mm of gum. Patients with superiorly positioned maxillae show less than 100% of their incisors, whereas patients with inferiorly positioned maxillae display an excessive amount of gum.20 Yet the amount of tooth and gum displayed during the process of smiling is not only related to the vertical position of the maxilla, it is also associated with lip animation and passive dental eruption.

Tooth eruption can consist of active and passive phases. Active eruption is the movement of teeth toward the occlusal plane, while passive eruption is related to the exposure of teeth through apical migration of the gingiva. When passive eruption does not progress, the result is a dental crown that appears short because of the presence of excess gingiva covering the enamel. Clinically, the most obvious sign of delayed passive eruption is a short clinical crown; also, sulcus depths, from the gingival margin to the cement-enamel-junction, are large (over 3 mm).1