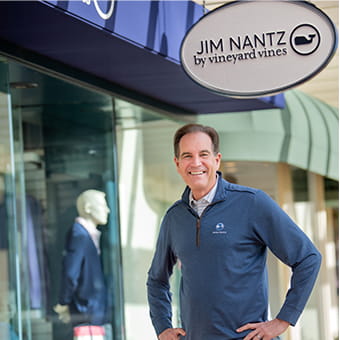 “My voice always sounded identical to my dad's voice," said Nantz. “I had an epiphany after I wrote a book about my father, that my dad's voice would be heard through me. When we opened the Nantz National Alzheimer Center, our goal was simple - to build the greatest clinical care and research institute in the world. Now, thanks to vineyard vines founders, Shep & Ian Murray and their wonderful team, we will be raising awareness and money for critical research to find a cure for Alzheimer's. I am on national television practically every week and hopefully viewers at home will look at these fantastic ties and say – ‘that's the guy who is on a crusade to find a cure for Alzheimer's."

Jim wears the symbolic Forget-Me-Nots as a tribute to the loved ones we’ve lost, those in the fight and the caregivers who are always by their side.

The collection can be purchased on the vineyard vines website, in the Pebble Beach store and in Houston stores now.