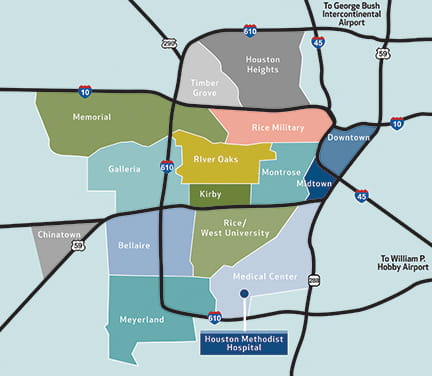 Houston, the United State's fourth largest city, is bustling with culture and energy. Founded in 1836 by Augustus Chapman Allen and John Kirby Allen, today Houston covers 8,778 square miles and has a growing population of roughly 2.3 million.

Houston is an entertaining place to visit. Take the food, for example. Houstonians enjoy the opportunity to try cuisine from all around the world. Regularly captured in articles on websites such as Bon Appetit, Food & Wine, and Saveur, Houston is home to internationally renowned chefs crafting their dishes in more than 11,000 restaurants in the city. We list a few of our patients’ favorites in the dining section of this site.

Houston has a thriving arts scene in the theater district with multiple theaters and residential arts organizations like the Houston Ballet, Houston Symphony and Houston Grand Opera. According to Visit Houston, the museum district stakes its claim as the country’s fourth largest, with 19 cultural powerhouses set within blocks of one another.
We highly recommend The New York Times article 36 Hours in Houston, which highlights things to do in the city when you only have a limited time available.

In short, Houston offers something for everyone. Here are a few other facts and figures according to the City of Houston:
Houston is classified into neighborhoods. We’ve identified the neighborhood for each of the resources included in this guide.
Navigation